Two of our contributors here are intrepid crate-diggers, as avid fans of the music of past eras tend to be. Your host was such a person once but that was a long time ago. While I still occasionally drag out a few pieces of vinyl, read the gatefolds and caress the grooves, I am by no means as addicted to buying these relics of a time when music was truly treasured (yes, I know records have made a mini comeback).

The same could not be said for Thomas and Simon, who offer the following confessions. And they have made me want to dust off my turntable!

If I am truly honest with myself … and in true High Fidelity style, I have a list. In no particular order, vinyl is, for me, about five things:

Discovery is simple: cheap vinyl, especially from fab second-hand stores like Missing in Glasgow or Unknown Pleasures in Edinburgh, has really opened my ears to new (to me) sounds. Over about a year I picked up the whole back catalogue of The Police, for example, at approximately £2 each. Each record is good quality and whilst well played, it has much still to give. I do think it’s harder to find a bargain — vinyl is becoming more mainstream, and the shops, especially charity shops, are catching on. I doubt I would find all of The Police for a tenner or so nowadays … but it’s still fun to hunt. I guess it comes down to possibility, as Kierkegaard put it:

“If I were to wish for anything, I should not wish for wealth or power, but for the passionate sense of potential, for the eye which, ever young and ardent, sees the possible. Pleasure disappoints, possibility never.”

I’m hunting for the potential of an album to move me … and, with few exceptions, I am moved.

Ritual is a slightly less obvious reason but one that fits with my nerdery and OCD. I love the whole process of listening to music via vinyl: the hunt in a fab wee record store, the careful transportation (up until recently in a bag displaying the name of said record store) home, the first play where the LP is given real scrutiny, storage (I store my LPs in autobiographical order) and then repeated plays thereafter, with the dust cloth out each time. This process fascinates me. It’s like coffee — grinding the beans, the brewing method, etc. I find it both exciting, sad as that sounds, and relaxing. I’ve made a choice and I have to live with it — no skipping! It is the antithesis of the MP3s on my iPod. 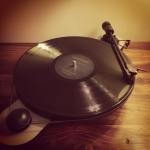 Sound comes third. I’m not an audiophile. I don’t have a Linn hi-fi and have only moved to my first ’audiophile’ deck (albeit a budget one). Recently I picked up the PROJECT Elemental, an early Christmas present from my family. It sounds amazing. A rich, wide sound that greatly improves my audio experience. The first album I played on it was Ghost Stories by Coldplay, and it sounded truly brilliant. I should have done this a long, long time ago.

I love the surface noise and the unique, almost organic nature of all the wee clicks on my copies of albums. The noise others hate, I adore because these sounds make me feel alive and at home. Crazy, I know, but it is true for me.

Support is my fourth reason. I’ve moved from exclusively buying second-hand vinyl and started buying new albums too. I see it as a means of supporting the artist, the cover designers and even the pressing plants.

Lastly, we have pretension. My inner hipster (okay, not so inner) loves the whole vinyl-buying … being seen with vinyl … talking vinyl … hunting for the perfect record bag or accessory … being a pretentious music fan. Not to put anyone down or to be better than anyone else … I’m not like that — more that music and records and collecting is my hobby, my sport, my mistress (as my wife refers to it). I guess I still value the sense of belonging and the tribal identification that comes from loving certain styles of music. I know that sounds nuts but for me, it works … and at the end of the day, summing up all I’ve said, vinyl just works for me. I get tremendous pleasure from listening to music in real time (ie no skipping) whilst examining the artwork. It just isn’t the same with MP3s and while I try my best to design great artwork for the music released on my netlabel, I know they’ll never compare to a beautiful cover illustrated by someone like Roger Dean.

I guess I’m just a materialist at heart.

My “love affair” with vinyl began, surprisingly, in my mid-teens when vinyl was on its way out. Woolworths had stopped selling it, very few albums were pressed on it, and those that were pressed are now super-rare but weren’t made very well. While I was at college, I had also fallen in love with progressive rock, so I often frequented the record collectors’ shop just up the road while everyone else was gorging themselves on Blur and Oasis. There I could pick up used vinyl records of Yes, ELP, Genesis, Pink Floyd and the like for around £5 a time. It was the best way to slake my thirst for music with what little money I had (these were pre-Napster days, by the way).

I certainly wasn’t enamoured with the sound; the family hi-fi had a nasty, plastic turntable built in, with a flimsy tone arm and one of those horrid integrated ceramic pickups that had about as much bass as Jon Anderson on helium. If I wanted to listen to an album in my room, I had to record it onto cassette — and our hi-fi’s tape deck ran that little bit bit slow, so everything was transposed a little bit sharp. But at least it was cheap!

Eight years ago I bought my first proper turntable, a glorified DJ deck with a USB output. It taught me a lot about turntable setup after having only experienced the cheap plug-and-play models. I learned how to set the anti-skate, how to balance the tone arm, how to fit and align a cartridge, and why the USB interfaces on such turntables are completely unfit for the purpose. Although there were no record shops in Tamworth, you could still find rich pickings at charity shops. I was picking up world-class LPs for pennies — something you can’t really do now that charity shops are far more eBay-savvy.

A few years later I received my first audiophile turntable, a Pro-Jekt Debut III. I must have spent an absolute fortune kitting it out with upgraded amps, mats and cartridges but never getting the sound just right. Eventually, with the birth of my daughter looming and my patience with turntable setup at an all-time low, I sold it off and gave a small portion of my record collection to charity — something I now regret since merely months later I missed having a turntable and bought a slightly-used USB turntable off eBay, which remains to this day.

But what is it that I like about vinyl? If you’re willing to forgive its shortcomings, it just feels definitive. Almost all of the albums I’ve loved over the years were made with vinyl in mind, so it’s almost like hearing them the way they were meant to be heard. There’s just something about it that’s aesthetically pleasing — it just looks, feels and even smells ‘classic’ or ‘vintage’ and can be appreciated in the same way you would a fine wine or in my case, a special reserve ale; the relative inconvenience of playing vinyl just means I invest more time in appreciating it. The slow spin of the record, the gentle bob of the tone arm, even the sound when you place the needle on the record, and it glides through a clean, lead-in groove is somewhat satisfying.

Today, very little of my vinyl comes from charity shops; it’s rare I find anything other than what I’ve dubbed DPAs — records that have obviously come from a deceased pensioner’s attic, the easiest of easy listening, James Last, budget classical LPs and military bands. Most of my vinyl shopping is now done via the various record dealers/market stalls in the area or the specialist charity “bookshops” which tend to have a better selection of clean, playable vinyl at a reasonable price. There are still bargains to be had, though; just a week ago, I grabbed a dozen vinyl records for £1 each and all but two were in near-perfect condition. They weren’t valuable or collectable and almost all of them were contemporary pop/rock, but they definitely had some great music between them.

Admittedly, I do convert all my vinyl into MP3s so I can listen to them during lunch breaks or when I can’t be near my turntable but there’s nothing quite like sitting down at my turntable, sticking the headphones on and listening with the sleeve on my lap, following the lyrics and appreciating the design and artwork as well as the musicianship.

It may be old-fashioned or anachronistic in this era of having everything delivered to your phone on-demand via iTunes or Google Play, but it keeps me off the street and out of trouble and helps me block out the noise from Strictly Come Dancing every Saturday night.