A genre I never really covered on this blog is country — not even the “alternative” country enjoyed by people who are horrified by rednecks and would run screaming from Toby Keith. I have a sort of uneasy relationship with country. As a big fan of UK folk and folk-rock, I also have a lot of respect for American folk traditions (Appalachian music, bluegrass, etc.), but like lot of over-educated urban types, the less savoury aspects of the country music genre really turn me off (lookin’ at you, Mr. Keith) — the “bro” country, mindless jingoism, faintly racist, definitely sexist, xenophobic, redneck-celebratin’ worst of America encapsulated in song. I’ve always thought there was a strong parallel between the worst of hip-hop and the worst of commercial country, but I guess that’s for another article.

Long way of saying, I personally am grateful for “alternative country”, because what it actually does is return country music to its proper lineage of music by the people, for the people, about real things, not about cheap exploitation. And there are a lot of prominent country acts today that have gone in that proper direction (Sturgill Simpson, for instance), back to Hank and Johnny and Willie and Woody and Loretta and the times when it felt like the people’s music.

Now here’s a stunning new addition to the genre from an unknown who shouldn’t be. Dilauro is a Canadian music producer and studio owner who clearly has an affinity for old-time country, as well as the country-rock pioneered by The Byrds, Flying Burrito Brothers, Nitty Gritty Dirt Band, Michael Nesmith, etc. This singer-songwriter album is actually quite diverse, veering from trad country (“A House Ain’t a Home”) to country psychedelia (“Empire of Illusion”) to Townes Van Zandt-style folk (“Distant Shores”) to Byrdsy pop (“Back Again”), doo-wop (“Keep in Line”), Stonesy crunch (“Meet Me Halfway”), and even a touch of modern Brit-pop (“Song for You”). More authentic somehow than the similar stew presented by venerable Canadian country rockers Blue Rodeo, that’s still probably the closest reference, though you can hear bits of Wilco and other modern roots favourites in there as well. 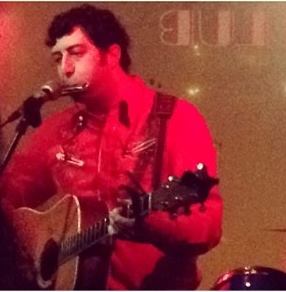 There’s quite a cast of local musicians participating in this labour of love, and the talents really show; the guitar playing is excellent throughout, harmonies are layered and sweet-sounding. The songs themselves have intelligent, heartfelt singer-songwriter lyrics that draw on country music’s tradition of honesty in heartache without resorting to trite cliché. And since the best reference I can dredge up in terms of describing the lead vocals is Gram Parsons, I’d say this album is a perfect addition to the collection of any fan of classic Americana.

Be aware that the LP version, which is very attractively packaged, contains fewer tracks than the digital download, but the download is included with the LP purchase.