The glorious, heady days of psychedelia and progressive rock in the UK produced some of the greatest music ever made by man or woman, certainly more than you’d think this little island should be able to. But it was quite the explosion of cultural creativity, and many iconic artists got their start during that era. Not only the big names, though, but many other artists started long and fruitful, if not always profitable careers during that time. One such act is Caravan, of Canterbury, Kent, a long-running group that has released many great albums to mixed commercial fortunes but to a large cult following.

Caravan came about from the split of local beat favourites The Wilde Flowers, which contained an astonishing amount of great and soon-to-be legendary players such as Robert Wyatt and Hugh Hopper, who went on to found The Soft Machine. Caravan was initially comprised of guitarist Pye Hastings, bassist Richard Sinclair, drummer Richard Coughlan, and keyboardist Dave Sinclair. The band’s early music is some fairly typical, if very pleasant psychedelic rock, but Caravan was soon to develop its own distinctly British vibe.

While The Soft Machine went for the avant-garde, harder edges of free jazz (and later in the seventies to a very eggheaded form of complex fusion), Caravan’s sound was smoother, more thoughtful and more based on fun and melody, despite being based, like The Soft Machine’s, on a heck of a lot of fuzz organ solos.

Hastings and Sinclair clearly had that mad sense of humour that distinguishes the likes of Monty Python and Derek and Clive from the comedians of other countries; that awkward, whimsical (whimsy: capricious humour or disposition; extravagant, fanciful, or excessively playful expression) sense that often makes Americans scratch their heads, with strange characters and fantastical settings set off against the prosaic rituals of daily life (usually involving tea; see Gong for a lot of that). Hastings actually has a very similar voice to Wyatt’s, high-pitched and a bit raspy, while Richard Sinclair’s is a rich, controlled, and friendly baritone. They played off very well against each other, though most prog fans probably revel in those lengthy organ-based arrangements. Strings were later added to the band’s sound, as well as more standard rock arrangements. R. Sinclair up and quit in 1973 (later to surface briefly but memorably in Camel) and was replaced vocally by higher-pitched but soulful viola player Geoffrey Richardson, whose elegant playing added a new dimension to a slightly poppier version of the band.

The band broke up at the end of the seventies, but the original members got back together for one more album in 1982. There have been subsequent releases, which apparently are quite good, so if you enjoy this music please do investigate further, as I do also intend to do.

The debut album is in some ways garden-variety Brit psychedelia of the era, lacking the overt jazziness of later releases. The ponderously swinging “Magic Man” is the highlight track (NOT related to the Wilson sisters), very memorable and melodic. The rest, while organ-dominated, is quite “flower power”… you could definitely hear them on a bill with “the” Pink Floyd and Tomorrow at Middle Earth. “Ride” has the usual pseudo-Indian raga-rock stylings that many bands went for during that time. The vibe is cool overall, but it turns out that psychedelic pop was not going to be this band’s forte — the long concluding track, “Where But for Caravan Would I?” with its lengthy organ soloing, holds the clue. But it’s still not jazzy enough. Yet.

This one sees Caravan establishing its signature style of gentle but still funky jazziness with eccentric lyrics and a pastoral pop sensibility. The fuzz organ solo makes its first appearance, too. It’s not as dreamy as the next album, but there are some ethereal bits, as on the ballady “As I Feel I Die“, the charming sway of “And I Wished I Were Stoned” (sung in Richard Sinclair’s equally charming baritone) and the band’s first epic, “Can’t Be Long Now / Françoise / For Richard / Warlock”. One epic per album would become something of a trademark, and this is the template: gentle, almost symphonic psych songs tied together in a suite by occasional frenetic but melodic organ solos. The band usually included a couple of shorter pop songs that presumably were intended as singles. “Hello Hello” on this album isn’t all that spectacular, but the album is on the whole a really pleasant listen. 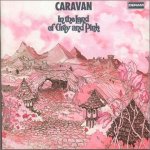 No one disputes two things: this is the band’s best album, and it’s one of the greatest prog albums of the era (i.e., one of the greatest albums ever, period). It’s really just simple to say — the songs are wonderful. Okay, “Golf Girl” is about picking up the tea girl on the golf course…it’s totally silly, but also catchy as heck. And it only gets better, with a new even more ethereal spaciness added with the surreal lyrics of the title track and its acoustic-guitar based arrangement. “Winter Wine” is also spectacularly groovy but almost rural at the same time, with a set of far-out, evocative lyrics. “Love to Love You (And Tonight Pigs Will Fly” is a cheeky little single, and the side-long “Nine Feet Underground” goes through no fewer than eight sections, some elegant songs, some remarkably intense organ and guitar duels. It’s not that this album description differs much from the others provided here — it’s just that this one is far and away the best of the lot, and probably the best example of a certain style of very English prog-rock, mixing surrealism and humour with jazz and psych vibes. No music collection should be without it.

Apparently some people don’t care for this album, which was actually the first Caravan CD I bought. They don’t like it because it’s in some ways the jazziest of the band’s albums (courtesy of new keyboardist Steve Miller — Dave Sinclair was with Matching Mole at the time), but really, the songs are extremely strong, from the ribald wit of the title track (let’s just say Waterloo Lily is a buxom lass who aims to please), and the harder guitars on the song are also pretty nifty. I admit that “Nothing at All” is some fairly horrid jazz-wankery, and “Songs and Signs” is another limp pop number, but things perk up mightily with a genuine pop gem in the groovy “Aristocracy”, and then get symphonic with the great “The Love in Your Eye / To Catch Me a Brother / Subsultus / Debouchement / Tilbury Kecks,” which introduces a string section and more poppy grooves to an epic suite. The closing “The World is Yours” is a very touching little love song.

Another early classic, the band’s first Richard Sinclair-less album finds string player/vocalist Richardson putting his stamp immediately on the proceedings. It’s a poppier affair overall, very melodic, with a much less pronounced jazz influence, despite organist Dave Sinclair’s return to the fold after a one-album hiatus. I suppose there may be a slight Grappelli-ish side to Richardson’s playing, but it’s for fun and funny rockin’ vibes that this album is best remembered. Unfortunately, it was all done without Richard Sinclair’s dexterity and heavenly voice (he had departed), but the thunderous drums and more aggressive guitar-based approach to “Memory Lain, Hugh / Headloss” almost makes up for it. And what other sort of band could get away with a Lovecraftian pun on the decidedly odd “C’thlu Thlu”? The ballads have a woozier (boozier?), less disciplined feel that is also appealing. Not an album that would-be fans should miss.

This live album was recorded with orchestral arrangements (there have been other archival live releases that just feature the band). This is worth having if you like a live album, because all the arrangements are there, but with extra immediacy, which works particularly well for “The Love in Your Eye“, which I may prefer in this version, actually. “For Richard” also gets a good epic kicking, thus demonstrating that string sections be damned, Caravan could indeed rock when necessary.

By this point, despite the length of some songs, Caravan wasn’t particularly a prog band, and this is a good but not great album anchored by the attempted stadium rock of “Show of Our Lives“, a fun song but like much of the album is lacking that fun, surreal jazziness that characterized earlier work. Mind you, the album title demonstrates that a certain playfulness had not departed! The “epic” of the album, “The Dabshirt Concerto” features some pretty cool (well, uncool, but cool to me) synth sounds and is a little Genesis-y in a Trick of the Tail sense in places, and therefore appealing to prog aficionados, but I do miss the funkiness of earlier recordings. The whole album has a sort of soft-rock, middle-of-the-road seventies FM veneer that keeps it from being a classic to me.

Caravan released three more albums in the seventies/1980, Blind Dog at St. Dunstan’s, Better by Far, and The Album, which I’ve possessed at some point but am not qualified to write about. They also did a full reunion of the original lineup in 1982 for a very low-key release, Back to Front, which is much shorter on jazz and longer on restrained adult pop, but Richard Sinclair’s utterly charming vignette of small town Kent life, “Back to Herne Bay Front“, to me is worth the price of admission. But then I’m a sucker for him, as you know.

The band has released a number of comeback albums since, all of which I’m sure have their virtues. Check ’em out.