As I frequently note in articles, there are many bands that started up during the musical explosion of the late sixties still making music today, or that had lengthy and presumably profitable careers. Yet the pantheon of rock Valhalla only admits a few, while musicians who released ten hit albums to millions of adoring fans are ignored by classic rock radio and collective memory. Well, that might be a touch melodramatic; if they were forgotten, young(ish) me wouldn’t be writing about them now, would he? But it’s still interesting to note that the Camels and Fairport Conventions and Moody Blueses and Procol Harums, while easily as or more talented and groundbreaking in many ways than some of yer Beatles, Stones, Who, etc., are not as respected overall by punters and critics as they should be. 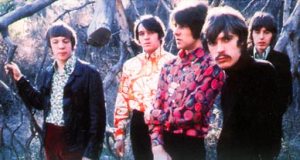 Procol Harum looking generically psychedelic, as did everyone from 1967-70

Yes, I’m suggesting that the best of Procol Harum is as good as the best of any band from that era. Yet they’re primarily known for but one iconic single.

In fact, Procol Harum performed certain kinds of music better than almost any other group of the period and contained a superlative collection of talent. The London-based band (several eventual members had been members of a band called The Paramounts in Southend-on-Sea), founded in 1967, of course was made up of fellows from beat groups who loved blues (seems that’s the only template in British rock of the period!), an influence that shines through in much of their work. But they were also musically educated and incorporated classical influences, one of the first bands to do so. They also did this without generally resorting to tweeness, which is a major accomplishment. Furthermore, there was a mixture of intellectualism and intelligence with an earthiness and wit, sometimes a rather dark wit, that is very appealing to the smart music listener.

As was common at that time, there were several prevalent genres mined for Procol Harum’s sound, blues, classical, and folk being the primary three. The band’s legendary first single, “A White Shade of Pale,” which borrowed from Bach, is of course the most famous example and is likely the only song that uneducated listeners know of. But there’s so much more to the band’s history than that song. And lyrically, thanks to Keith Reid, I’ve never come across a more philosophical collection of songs — sometimes in a very bleak way. So when they weren’t being the UK’s answer to The Band, they were crafting melancholy existentialist diatribes. An interesting contrast. 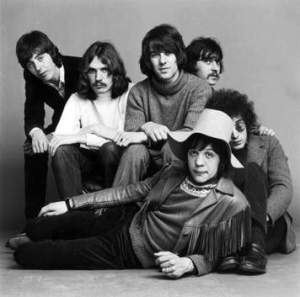 Looking looser and meaner, as bands did after 1970.

So, while that first iconic single is seen as emblematic of the psychedelic era, this band’s ambitions went far beyond trendy button-pushing and into very serious musical territory.

The key, of course, to an interesting musical blend in a group is an interesting blend of musicians, personalities, and the artistic tensions that creates. The main creative forces were Gary Brooker, a sliver-tongued pianist who really is the UK’s version of Richard Manuel, albeit more polished; fiery lead guitarist Robin Trower, steeped in the blues and later to establish a long solo career as a cosmic Hendrix-influenced blues-rocker; and Matthew Fisher, an expert keyboardist and composer. Drummer B.J. Wilson’s amazing technique was also an important factor in the band’s sound.

Oh, and like a few bands of the period, King Crimson for example, PC maintained their own in-house poet, named Keith Reid, to come up with the bulk of their lyrics, so if the material often seems cynical and downcast, blame him. I love it! In fact, this is one of the few bands of which I can say I don’t remember hearing a single smooshy love song in their catalogue.

Due to the tensions strong personalities create, Fisher didn’t make it past the band’s third album, and it’s fair to say there was a very slight dropoff in quality once he was removed, but not enough to make any of the albums I talk about below anything but essential.

And that’s what Procol Harum’s core discography is: essential. 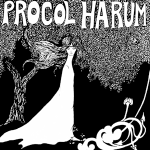 You’d think album one would just be a vehicle to put out “A Whiter Shade of Pale” again. But nope. This is a fine piece of work. It’s not particularly psychedelic; Trower is already chugging along heavily underneath the epic-sounding “Conquistador,” later made more famous when released on a live album with the Edmonton Symphony Orchestra (I still find that funny…Edmonton?). The band’s career template is laid out here: smart, often odd, dark lyrics, Brooker’s soulful singing and ivory tinkling, groovy rhythms with lots of variety in each song due to B.J. Wilson’s inventive drumming, Trower’s bluesy wailing, and Fisher’s churchy organ. Highlights? “Something Following Me” is a very good song. What’s missing is the folk influence of later albums, since this one is focused more on jazzy noodles than sophistication. A fine debut, though not one of the greats.

For album number two, bands always liked to try to push the envelope and let their sound blossom. Well, for PC I’d say that wouldn’t really happen until album three. This sounds much like the debut. The title track is another mid-tempo slightly classical-influenced burner that I believe was some kind of hit. “Quite Rightly So” is one of Fisher’s finest hours as his organ leads one of the band’s most tuneful tracks. I dunno, all the hallmarks are here, but despite the ambitious gothic heights reached, both lyrically and musically, by “In Held Twas I,” (parts one and two, of course…it even has a fairly lengthy section of spoken-word poetry!) this album really just feels like the debut part II. And frankly, there was a junction reached here that the last piece I mentioned represented: they could have gone full-on progressive pomp rock but instead took the other fork in the road, got both earthier and smarter, and were the better band for it. 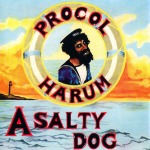 A Salty Dog is an astonishing album. Even in an era of great pieces of musical art, it stands out for its sheer creativity and often apocalyptic tone, with imagery of violent storms at sea, spiritual dark nights of the soul, and crippling loneliness. The title track is justly considered a classic, a sweeping piano- and string-led ballad of death at sea (right down to the addition of waves and gulls)…a voice may never have soared quite like Brooker’s does on this. The rest of the album veers between classical-tinged majesty (“Wreck of the Hesperus”), dark, driving blues (“The Devil Came from Kansas,” “Juicy John Pink”), and proto-psycho-folk (“Too Much Between Us”), with the addition of a peculiar, sloppy, almost Caribbean-sounding pop number, “Boredom,” Brooker, Fisher, and Trower each get their moments to shine, and by the time the gentle “Pilgrims’ Progress” closes the proceedings, you’ve been on quite a real journey of the mind. Despite the lack of pompous epics, THIS is what art-rock is all about, and it’s Procol Harum’s best album, hands down. 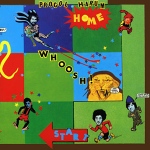 Home is kind of Salty Dog part 2, despite the loss of Matthew Fisher in the interim. The blues songs are darker, the lyrics are even more despondent (even dreary), and shamelessly so. Of course, that’s right up my alley! The super-gloomy “About to Die” is… exactly what you’d imagine, reeking of desperation, despite its tension-releasing Band-esque chorus. “Nothing That I Didn’t Know,” a folk-style ballad about death through illness, is one of the top-10 saddest songs I’ve ever heard, and that’s saying something! There’s even ultra-violence on the hard-rocking “Still There’ll Be More,” which is basically five full minutes of Brooker threatening some detested enemy! The album’s epic is “Whaling Stories,” for you proggers out there… definitely picking up where “A Salty Dog” left off. Dang, this album is DARK. I don’t understand why it’s not more renowned for that aspect alone. 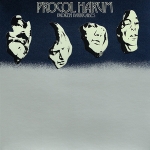 This is the band’s heaviest album. It was also Robin Trower’s last before embarking on a very successful career as a cosmic bluesman. And he burns the barn down on the way out, lending incendiary Hendrixian solos and harsh, charismatic vocals to songs like “Song for a Dreamer.” Brooker is taking no prisoners here either, positively spitting out the lyrics on hard-driving rockers like “Power Failure” and “Simple Sister.” This is some serious rocking. And “Power Failure” does contain one of the few drum solos I can stand — Wilson really was quite the skinsman. “Broken Barricades” manages to do some proggy, synthy grooving, and “Luskus Delph” is another off-kilter ballad, this time with classical arrangements added. Basically, this is a powerful blues-rock album, but it retains the band’s intellectual edge. Probably #3 on the must-have list here.

Instead of staying raw, Procol Harum changes course here to attempt to find a greater level of sophistication. They are joined by new guitarist, Mick Grabham, who doesn’t miss a bluesy lick and sounds quite like Trower on most of the proceedings. Wry and ribald humour still abound… guess what the “Souvenir of London” he brought back was? “Bringing Home the Bacon,” while it has silly lyrics, is one of the band’s catchiest, riffiest numbers. The epic title track, a cheerier version of the sort of balladeering done with “A Salty Dog,” is a truly grand sweep of olde worlde classical charm, featuring strings, what sounds like a full choir (of real people, not a mellotron), and bits in waltz time (natch). Who’d have thought a song about a hotel could have such appeal? While moments verge on that very British sort of tweeness (“A Rum Tale”) we all detest, generally they manage to pull back from the precipice. While the album does rock in many places, I can easily imagine the band performing in those tuxedoes from the album cover! 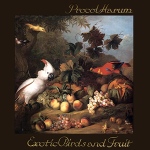 Procol Harum released a few more albums in the seventies, a couple of them, bizarrely, produced by Leiber and Stoller! I can’t speak about those because I’ve only heard the odd song here and there. However, I think it’s fair to say that like most art-rock bands, PC’s work in the period lost some of its vitality. That’s not to say that there aren’t good songs here; “Nothing But the Truth” mixes prog with an almost glammy feel, to rockin’ effect. In fact, there is an impressive amount of energy in this set, but the songs just aren’t quite as memorable. When they’re doing their R. Manuel (“As Strong As Samson”), things are very groovy; when they’re trying to be artsy, as on “Monsieur R. Monde”…not at all. Worth checking out only if you discover you have a strong taste for the Procol Harum sound.