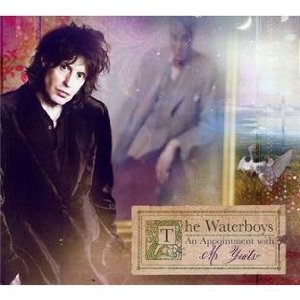 Scotsman Mike Scott’s puckish comet of a persona has blazed a trail of unabashedly romantic, mystical and ambitious Celtic rock ‘n roll wit and wisdom across the musical sky for a few decades now. He reached his musical maturity in, oh, 1985, and the quality hasn’t let up since. He’s produced a wonderful discography of consistently interesting, uplifting and enlightening music (which I give good ink to here and here), and is also a dynamic live performer with a knack for putting together crack bands to bring his music to life.

I’ve seen Scott play four times now, the first time in the late eighties (or early nineties?) on the Room to Roam tour, then touring his solo album Bring ‘Em All In, a few years ago when he was touring The Book of Lightning, and the concert I’m about to talk about.

The wife and I trekked across town then down into the grounds of the Canadian National Exhibition, which is not something, Mr. Scott, that I would do for just any musical act. The Queen Elizabeth Theatre is a new building in a city full of downtown venues, so it seems a bit superfluous as a venue to me, seeing as it’s stuck in the CNE parking lot gulag. The place was good ‘n full though, which was nice to see.

After a brief opening set by very Dylanesque Scottish folksinger Freddie Stevenson (accompanied by a pretty darn tasty banjo player), Scott and the band strolled out dressed in some natty vintage-looking suit attire. I had not read up on what the theme of this tour would be, but I should have gleaned it, considering there’s some super-deluxe version of the classic Fisherman’s Blues album (which you will see on this fine list) coming out.

When they launched into “Strange Boat” right off the bat, followed by “Fisherman’s Blues”, and in short order, “We Will Not Be Lovers” and “When Ye Go Away”, it sure was a trip back to 1989 for me. I actually felt a little emotional remembering how inspired my younger self was by this music. Scott had pretty well stayed away from that material on the previous tour I saw.

There were also spirited versions of songs going all the way back to the band’s first album, the chestnuts “A Girl Called Johnny” and “The Girl in the Swing”, as well as several songs from This is the Sea, “The Whole of the Moon” (naturally), a roaring rendition of “Don’t Bang the Drum” and a vitriolic encore of “Be My Enemy”. There were even two songs I’d never heard before, one a rather silly but fun glam-rock tribute to Elvis.

All of this made me quite nostalgic, I must say. Though why Scott ignores his masterpiece, A Rock in the Weary Land, is beyond me. But hey, it’s his show. And to remind us that The Waterboys are most definitely still a vital artistic force, the band played several songs from the recent, excellent An Appointment With Mr. Yeats album. To the crowd’s credit, a good deal of attendees seemed familiar with the material and listened rapturously to beautiful renditions of “White Birds” and “Song of Wandering Aengus”. While Yeats’ verses that reference Roman orators and Greek philosophers may seem a bit incongruous in a rock context, there’s no doubt that these are some of Scott’s most inspired and well-arranged songs, ranging from aggressive Celtic rock worthy of Horslips in 1973 to delicate, airy ballads.

The band itself featured a number of new faces. Longtime member Steve Wickham played his usual virtuosic, flamboyant counterpoint to Scott’s cocky strut, ever the fiddling pixie, alternating between a traditional fiddle and reeling off wild rock solos on an electric violin. Scott and Wickham make an incredibly magnetic and dynamic rock team. But guitarist Jay Barclay distinguished himself with a number of very melodic solos (including a dramatic “guitar war” with Wickham, donning masks, exchanging licks and featuring Middle Eastern scales) and also helping out on mandolin and banjo. My wife was particularly impressed with the rhythm section (god bless her!), and it’s true that some fabulous drum fills on “We Will Not Be Lovers” stole my attention for much of the song!

Unfortunately, and this is probably due to the limitations of this newer venue, the mix did not come across well, with organ solos blasting our ears while a lot of Barclay’s fine playing was lost in the murk.

A couple of audience notes from a grumpy aging man and musician. I’m tired of these things and must note them.

—Yelling things like “We love you” or trying to make wisecracks to bands is stupid. What are you looking for? Attention? There’s always a few bozos who feel the need to desperately try to interact with bands. Stop. They’ve heard it all before and you just sound pathetic. Go Tweet your love for them in silence.

—I heard a guy behind me expressing his disappointment at the crowd’s perceived lack of engagement. I guess he wanted everyone to freak out on their feet for two hours, ’cause that’s, like, rock ‘n roll, maaaan. Don’t you want the band to feel looooved? Well, dude, don’t worry, the band has an attentive audience of people really enjoying the show. They’re happy. The applause was loud and long. And some of us like to listen to the music rather than hoot and holler for the whole set so we can go home feeling like we had an awesome time at the rock show.

OK, but sour blogger’s grapes aside, I left really happy with Mike Scott’s ability to give us a different show every time, with a varied selection of songs from his discography and a fervent and infectious onstage energy. Long may he and his band roam.