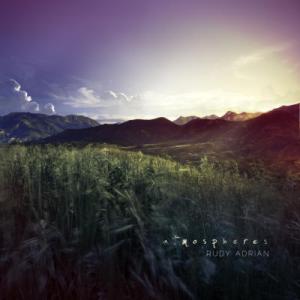 I think it’s time that, in addition to my posts on unheralded netaudio musicians and my posts on musicks of historical interest, I should also be reviewing the new releases I buy, because you know, that will make my blog even more current. OK? A little window into my thought processes there.

Hence, I give you a very recent purchase. Rudy Adrian, a Kiwi, has been making quite delicious ambient for some time. I had thought his work was restricted to beauteous light nature-ambient, as found on his classics Moonwater and The Healing Lake, but my recent purchase of Distant Stars showed me that his discography is actually quite diverse, since that album contains some harsher, more dissonant and darker sounds in addition to some pretty pieces. Adrian has also dabbled in sequenced Berlin School-type electronica.

The anticipated Atmospheres, however, is very much in the ultra-lovely end of the spectrum. Like Robert Rich’s most recent album, Nest, Atmospheres is a set of shorter ruminations on natural, mystical themes. The album is based around the kind of ethereal pads that ambient fans just can’t get enough of, layered until they suffocate us with their prettiness, and with glistening, glittering sounds skipping around overtop. In this, Adrian’s work is quite similar to that of his fellow nature-ambient devotee, Thom Brennan.

The mysterious “Apple Tree Bay” is a perfect first track, quiet and a little melancholy. It leads into the title track, which is bigger-sounding, more a piece of space music. The enchanting “Willow Bank” gives us the pure sound of tranquillity and peace in its high, celestial tones, while the wonderfully named “Through a Cave into Another World” is more of a journey, with classic-sounding synthy pseudo-melodies chiming over a bed of drones, in the style of early Roach or Stearns. Tinkly bell- or glass-like percussion comes in after a while as well to emphasize the sonic story being told.

The story seems to be picked up again on on “Beyond the Silver River”, which features some beautiful field recordings as well as some Central Asian-sounding vocals from Adrian. I felt like I was transported to a mountain valley in Turkmenistan or something like that. And finally, the longest track, “Dreams of Subantarctica”, features pads that gleam like sunlight on snow, oceanic field recordings and another mysterious and elegant vocal — Lemurian rather than Arabic, perhaps?

This may all sound like the makings of a pretty typical ambient album to you, but the reason I’ve provided this review is that, as I’ve said before, the difference between competent ambient and the work of a master lies in the small details, as well as an ability to sustain a magical mood and the listener’s attention for an hour or more, with few variations to the overall sound and structure. Adrian proves himself to be one of those masters with this wonderful album. “Beauty” barely begins to describe the delights to be found here.

Leave a Reply to Make Your Own Taste Cancel reply