Genesis is one of the most popular progressive rock bands of all time. Actually, one of the most popular bands, period. The band released a lot of albums in very distinct phases (either 2 or 3, depending on who you ask). And amongst its admirers, you’d think there’d be a consensus about what constitutes the band’s best work. Well, this exercise I had my three writers participate in clearly shows that there is not; one man’s “meh” is another man’s genius, and that’s what’s wonderful and amazing about music appreciation; it’s personal, and that’s the magic and mystery of it all.

Hats off to Phil, Tony, Mike, Steve, Peter, Ant and yes, even Ray as well as Chester, Bill and Daryl for all the pleasure their music has given us.

(note: the Ed. chiming in is me, which is my prerogative …)

Yes, I’ve put this in ahead of most of the Gabriel era, but hear me out. After Foxtrot, they were riding the crest of their creative peak. Calling All Stations, on the other hand, catches the band in unknown territory and leading with the left foot. Phil had abandoned them at their most commercial, with the dark, husky (Gabriel-like) tones of Ray Wilson as his replacement. So, how did they deal with such upheaval? Well, they turned 90 degrees and went heavy! The drums had tons more weight, the guitars had lots more aggression and the lyrics probed much deeper. Okay, the final song selection was a bit dodgy — some of the better songs wound up as B-sides to the expendable “Shipwrecked” and “Not About Us” — but nevertheless, to me this was by far their best album since Duke. I just wished the band had not judged the album so harshly based on its poor reception in the U.S. (we Europeans were far more positive). I’d have loved to have heard how their sound developed.

[Ed.: Considering the situation you’ve created, a long explanation was probably required and for the best … but I actually quite like “Shipwrecked”.]

I have a soft spot for Trespass. They were young, ambitious and creative, but still very much a band in development. Sure, it lacks a fair amount of spit-and-polish, but listen to the songs themselves. I love the whole pastoral folkiness of it, culminating in the jaunty gallop of “The Knife” — a song so unusually complex and meticulous for such a young band that it knocks you totally off-guard.

[Ed.: Yeah, these dudes were, what? Nineteen or something? Crazy]

3. Voyage of the Acolyte

I’m going to be controversial (again) and throw in a Steve Hackett solo album, but to me this is the best album Genesis never made. In fact, it’s practically Genesis from a parallel universe where Tony Banks jumped ship after Seconds Out instead of Hackett. The English middle-class folky melodies remain, as do the sturdy fusion-like rhythms of Rutherford and Collins in their prime; however, with Banks out of the way, Steve is given free reign to pepper the album with his dazzling guitar runs and tactile twelve-string technique. Besides — on no Genesis album will you find such a dramatic and slow-burning epic as “Shadow of the Heirophant”.

[Ed.: Simon, you shit-disturber. But I’m going to play by the rules and leave Smallcreep’s Day off my list.]

Two words: “Supper’s Ready”. A track that not only defined the album but the whole genre. Yes’s “Close to the Edge”, awesome as it is, is a distant second. In fact, if I didn’t find “Get ‘Em Out By Friday” a bit iffy, the album would be almost perfect since it is loaded with dynamics and character, garnished with the most iconic mellotron intro ever made.

[Ed.: Yes fans are gonna have your guts for garters.]

Forget the plethora of “hits” compilations — if you want a comprehensive summary of Genesis at their creative best, this is it. “Supper’s Ready”, “Firth of Fifth”, “Carpet Crawlers”… it’s all here; performed with a surprising amount of skill, energy and confidence considering it was recorded during Phil’s first few outings as front man. If that’s not enough, you’ve also got a full-on drum battle between Bill Bruford and Phil Collins — two world-class drummers at their peak, locking horns in a very evenly matched display of skill.

Notable exclusion: 6. Trespass: This album pointed to the genius of the others mentioned above … and Anthony Phillips’ guitar on “White Mountain” is truly brilliant.

I really like the synths on this album … Tony Banks really made this special. It is less prog than the earlier albums, and “Your Own Special Way” is a rather lovey-dovey delight … but it works for me.

[Ed.: I will now think of you when I listen to that song…]

4. The Lamb Lies Down on Broadway

[Ed.: Thomas is displaying a talent for succinctness.]

The rather subdued beginning of the opener, “The Musical Box”, is such a delight, especially as it evolves into a raucous air-guitar fest before Gabriel starts singing about Old King Cole. It is truly bonkers but in a good way.

[Ed.: What about that giant hogweed?]

From the euphoric opening, “Watcher of the Skies”, it is just mental — frenetic and calm and pretty much every point in between. We need more bonkers in music and this is testament to why. “Get ’Em out by Friday” has the most amazing syncopation too … with keys that never get old to me.

[Ed.: The opposite get ’em out opinion to Simon’s … interesting.] 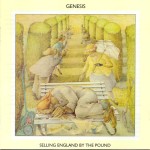 1. Selling England By The Pound

Why? Because it features “I Know What I Like (In Your Wardrobe)” which, thanks to Top Gear, holds great memories … and the epic “Firth of Fifth”, which is simply a joy to listen to and demonstrates everything that is ‘right’ with progressive music.

[Ed.: Safe choice but probably the right one, laddie!]

I discovered Genesis when Phil had long assumed the role of lead singer, and Peter was an established solo artist with four albums already. So my perspective might be slightly skewed, but these are honestly my fave albums. I know what I like!

Side 2 holds up better for me than Side 1, although “That’s All” is one of their best singles (next to “Turn It on Again”).  A mix of dark progressive (although not as technically difficult as their other albums) and pop/rock and even novelty (“Illegal Alien”).

[Ed.: Good album but I can’t believe you went there at the end!]

4. Selling England by the Pound

Probably my fave of the PG era (yes, more than “The Lamb”), the last album the whole band were working together and some of the most enduring melodies in their catalog. Some falldowns like “Battle of Epping Forest” are more than made up for in “Firth of Fifth” and “After the Ordeal”.  Some of Banks and Hackett’s best work.

Peter’s gone, but from the opening power of “Dance on a Volcano“, I get the feeling the band is out to prove something. Although as a singer I prefer Peter, Phil’s vocals work really well with the material the band are writing and it’s an album that doesn’t really get enough praise.

Even with Phil bringing in the Earth, Wind, and Fire horns (in fact, a number of these tracks could be mistaken as PC solo tunes), there are so many weird mixes of pop, new wave (“Keep it Dark“) and progressive hangover that it remains a fave after going back to it many times. Although the b-side “Submarine” should’ve been on the album and “Who Dunnit?” left off. 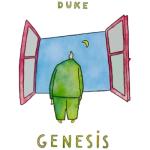 Is it a concept album? I believe it is, but it gels so nicely together. These songs work as standalones and as an album — nothing feels out of left field and some of the best writing the band has done together as a trio. Plus you get their best single, “Turn It on Again“, and Phil even learns the Zappa drum-fill from Chester.

Say what? Yep. Okay, so my thing for Phil is acknowledged and public, but all that aside, the eighties was an era with a lot of hit pop albums. A LOT — it was the decade when a lot of coke and LPs were sold. And this is one of the best of the latter, totally packed with toe-tapping charmers from the title track on. How many hits were on this, anyway, six? Seven? AND there’s even the occasional prog remnant to be found on such tunes as “Domino” and “Tonight, Tonight, Tonight”. Phil was king of the music world at this time, and damned if you can’t just feel it. Once you get used to all of Banks’ digital fooferaw and argle-bargle, it’s magical.

You might think I’m nuts for picking this over albums like Foxtrot and Nursery Cryme. I could play those albums all day, but as pointed out earlier, there’s a pastoral, ethereal quality to this album that didn’t appear much on Genesis albums thereafter; aside from the aggression of “The Knife”, it’s mostly tranquil and almost medieval in flavour. And “White Mountain” makes me feel sad for that poor wolf — see, empathy! That’s what music’s all about.

Yes, this is the big album where PC replaced PG, while still singing kind of like PG. Yes, it’s actually the album that really made the band a hit, especially in the U.S. But really I love it because it’s just a very coherent set of melodic art-rock; it’s by turns fun with “Squonk”, mystical with “Ripples” and tense with “Dance on a Volcano”. But the capper for me is the surreal ballad “Entangled”, with those lovely spacy synths and chiming guitars and that sing-song melody. Perfect! Banks really asserted himself on this album.

2. Selling England By the Pound

The obvious choice, and most people’s, no doubt. It contains almost every iconic “early Genesis” moment: the guitar solo in “Firth of Fifth”, the uplifting synth theme in the middle of “The Cinema Show”, the elegant chords of “Dancing With the Moonlit Knight”, the weird spoken word bits and the hook of “I Know What I Like”. The sheer inventiveness, melodic sensibility, instrumental dexterity and charisma on display here are dazzling. How could anyone not like this music?

1. The Lamb Lies Down on Broadway

But still, there’s a better album than that. Fortunately for my aching fingers, I already wrote a long review of it, which you can read right here to find out why this is the best progressive rock album of the seventies (or probably ever).