Man, time flies. I’ve gotten through quite a few submissions recently, though, and here’s the pick of the crop.

Veteran prolific ambienteer Pete Kelly returns with yet another instant classic, which was not submitted to me per se, but I wanna mention it. These three tracks are actually quite diverse. The first, “Liquid Emerald”, is eerily close in vibe to the sounds of early ambient pioneers in their heyday, meaning musicians like Manuel Göttsching, Michael Stearns and Kevin Braheny. A lovely piece of classic electronica with vintage celestial sequencing. “Sapphire” is darker, more noctural and driftier and reminds me more of the pieces on Kelly’s last release, which I reviewed and loved, NYX. Lastly, the massive “Lignite” is dark ambient of the most cavernous variety, with booming bass and mysterious windy sounds creating a foundation for moody, ethereal chords. Each of these pieces is different and each is a jewel in its own way. Like all Igneous Flame releases, this is sure to please any and every ambient fan.

Free Floating is basically THE netlabel to go to for classic-sounding drifty long-form ambient, and this new (well, actually re-released) 53-minute opus by British musician Simon Slator is no exception. It’s very much a classic spacy ambient album that reminds me of stuff as venerable as early Iasos and the very first Steve Roach albums. This means synths so wispy, they sound like vintage seventies “string synths”. I loves it! As I said, it’s classic-sounding, with the wispy synths providing the drone, some gently pulsing bass and mid-tone notes and gently rising and falling higher parts. I suppose there may be four patterns going on here by the time it’s over, but damned if I care. This is some seriously relaxing, spiritual stuff. Free or donate over at the label’s Bandcamp pages.

This is a very experimental release on the Pueblo Nuevo netlabel. An eighteen-minute examination of uncomfortably scratchy noises and mechanical drones may not sound too attractive to you, but there’s a great sense of building tension as the sounds gradually increase in intensity to a controlled roar. A faintly heard, faintly musical note underscores most of it, but this ain’t for the faint of heart. However, experimental music lovers will quite enjoy it. And finding a new netlabel to support is always a good thing, methinks.

Yet another long-form piece, this is a 34-minute excursion by an Israeli act that rides the line between dark ambient and ethereal space music. Apparently it’s improvised, which I find quite impressive. Some of the mysterious thumping and noisier, echoey sounds (including buried spoken vocals in one place) are classic dark ambient tropes, while the delicate organs, synths and treated guitar melodies (it sounds like guitar, anyway) make for some highly listenable ambient indeed, in a cosmic Kawabata Makoto kind of way. Those who like to take space voyages on the wings of music will definitely want to check this out (ohh, wasn’t that poetic!).

This is a lovely little collection that, amongst other things, fuses minimalist piano ambient with some quite experimental sounds (not unlike my own latest album — but I digress). If you liked the Alva Noto/Ryuichi Sakamoto collaborations, then the piano-based title track and “Ordos” will float your boat. However, this a very varied release tied together consistently by the ghostly eerieness of the overall vibe, which is very attractive. Along the way Qepe covers IDM (“A Fine Balance”), Eastern-tinged psychedelia (“Permanent Listening”) and experimental sounds (“Ruin”, which also includes a very compelling female vocal that sounds exactly like Kate Bush!). A very impressive array of styles is on display here, each rendered confidently. A fascinating release.

The eighties are in these days, but that doesn’t mean that all this pastiche going around is a good thing. Aping the sounds of yesteryear is pointless unless you are bringing your own personality to the proceedings. Canada’s The Silence Industry takes on Goth/industrial sounds and does it so well that it’s hard to believe this wasn’t released in 1986! In this case that’s a good thing, because this is an excellent collection of songs that hearken back to the glory days of bands like The Cure (with perfectly rendered Simon Gallup bass sound), The Sisters of Mercy and Killing Joke in their synthy period. Even the drum sound’s reverb is perfect. The songs themselves are nicely melodic, my favourite being the moody “Behind Plastic Eyes”, which has a great (and also authentic, of course) lead guitar sound. Like I said, if you’re recreating the sounds of my youth, you better be damn good at it, and this is damn good — and pay what you can as well!

If you read my last roundup you’ll know I went apeshit for a rather long album by Cousin Silas. So when I received yet another one, I listened! This is a 71-minute light longform drone piece, mega-tranquil and not dissimilar to my favourite long piece of all time, Thom Brennan’s “Satori”. So if you are a fan of long, sweet, slowly building, peaceful drones, you will need this in your collection. 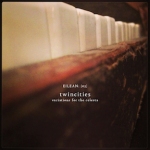 Twincities – Variations for the Celesta

A celesta is sort of glockenspiel that looks like a piano — a struck instrument, anyway. I’ve heard it before, but certainly not in this way. This album is not a purdy new age affair, more a 12k-ish slice of sound art. The “Prelude in E Major” is quite a pretty, albeit murky drone. In fact, a murky, kind of misty, autumnal feel pervades the recording. Most of the tracks are built on moody drones, with the celesta tinkling overtop and field recordings/other weird noises burbling around as well. While not particularly varied, it’s definitely a compelling and mysterious listen. For admirers of such artists as Lawrence English and Sawako. Funny, after I wrote all this I noticed that 12k’s Taylor Deupree mastered this album.

The Chewers – Chuckle Change and Also

This is really not the sort of submission I usually get, but I’m pleased to have received it. The Chewers do radical avant-garde rock music, and this twenty-two track collection of razor-sharp little songs is a misanthrope’s dream. Think of a dissonant version of sixties urban revolutionaries The Fugs or the farther reaches of The Residents. Undermining our mores, musical and otherwise, seems to be the order of the day on such cheeky, twisted numbers as “Techno-Slaves” and the spoken word “Inmate 227”. The general tone is quite attractively psychotic. Along the way we get some fuzzy bass, plenty of clattering and chattering jazzy guitar and even some barroom piano (“Smiling Samuel”). This music could only be American, somehow. Some tunes would be acceptable for regular pop lovers, but avant-garde instrumentals like “Teeth Lock” would really appeal to fans of left-field bands like Henry Cow. A really impressive and daring collection of songs. I also like the fact that the dude on the cover looks like a ghoul from a Lovecraft story. I am a geek.