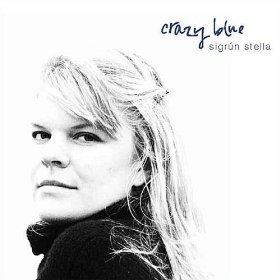 I have catholic tastes (not Catholic, though liturgical music is OK), and I like a solid singer-songwriter as much as the next fellow or gal. They’re hard to come by. A singer-songwriter has to take that hoary old form of the popular song and make it their own — they have to give us a strong identity to make us listen and remember them by. Most do not. Most are just blah blahing about how they miss their girlfriend or boyfriend, and frankly, why should I bloody well care?

I’m an aficionado of good lady singer-songwriters, from the obvious (Joni Mitchell) to the lesser-known (Sandy Denny, Judee Sill, Bridget St. John, etc.). You rarely hear a strong new voice in that genre, in my opinion.

When this disk came my way, my ears pricked up. Sigrún Stella is an Icelander who lives in Toronto. We all know that Iceland is a very distinct, isolated place with a reputation for turning out eclectic, moody music, and Stella’s music fits the bill to a T. It’s a combination of darkly bluesy songs with elegant, melancholy ballads that do contain a whiff of the ice of the fjords. This strong, confident debut is aided by excellent retro-style production redolent of the early 70s classics of female singers. It’s a refreshingly uncheesy collection.

But this artist’s strongest asset is her voice, a powerful instrument capable of subtlety and power. Very impressive indeed. I don’t know if she came down from the volcano like that or if she practiced for years, but I’ll take it.

“Spin the Boy” is a delicate country-pop song with some wonderfully produced acoustic guitar sounds and a production style that would suit a Sundays record.

The piano ballad “Stolen Sisters”, a very serious song with great lyrics about the forced break-up of Native Canadian families, is quite painfully gorgeous, with the piano sounding like something recorded in an old echo chamber in 1965. When the string sounds swell, it takes the song to a whole new level. I do believe that might be mellotron! Did I ever tell you that mellotron is the best thing ever? Listen to my album to hear how much I love it.

The Icelandic blues of “Kreisí” is not my bag but does provide a nice break from the musings. It does feature some rather virtuosic blues acoustic playing.

This is followed by what sounds like a traditional Icelandic folksong, which is very pretty and dramatic. I’d like to hear a whole album of this, please.

But like all great albums, we wait for the closing track. And it better be good, because that’s where the magic has to happen. I LOVE a super-dramatic closer and without one, a pop-rock album is nothing. Just nothing, dammit.

Well, I’m happy to say this album has one! The producers went all out on “Bestest Friend”, which features Stella’s vocals drenched in reverb so the words don’t matter, swelling strings, that echo-chamber piano again, a stately rhythm and a beautiful melody. It’s a don’t-miss.

This is a very strong debut album of good songs aided by classy production, and if you like girl singers, pick it up. This Valkyrie has a future.

Unfortunately, a YouTube link to the awesomest track appears not to exist, but: