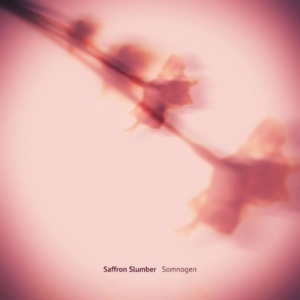 Funny things are happening these days. For instance, back in the dark ages, there was no way to offer your music to the world without pressing a CD and mailing it to people to try to get them to listen. Now, of course, anyone can throw anything they want up on the Internet. Now, we have netlabels presenting us with free music. And yet, I’ve come across review organs and yes, even bloggers who won’t touch anything that’s not a “commercial” release, as if the only way your art is legitimate is if you’re asking for money for it. What a bunch of BS. Let me offer this album here as evidence that free music is as good as anything people are charging for. As I remarked in my previous review of VACVVM, I’ve downloaded a ton of netlabel albums, and just as in the days of going downtown to buy a stack of CDs, some of it’s just OK, but there are albums that stay with you. The experience is identical. Saffron Slumber’s Somnogen is one netlabel release that has stayed in consistent rotation, and there’s a good reason for that: it’s wonderful.

A quick side note: this album was released by yet another excellent netlabel, Resting Bell, purveyors of top-shelf ambient music for a number of years. You can’t go wrong with Resting Bell’s releases. Pretty website, too.

OK, so, on to the recording. I must admit I have yet to explore the breadth of the releases Kevin Stephens has put out as Saffron Slumber. I really should rectify that soon, for this album, Somnogen, is, no foolin’, one of my FAVOURITE ambient music albums. What, you say? This guy says he has hundreds of ambient music recordings on his three hard drives, and this humble free album is one of his FAVOURITES?

The point of ambient music is to transport you. It’s to take your mood, which is probably a bad one if you’re alive in the 21st century, and transport you to a better place, or at least a different one. Drone ambient at its best can have an incredibly pacifying effect on the fraught brain of a modern human. In fact, it might be our only hope!

Anyway, my aim here is to tell you that Somnogen achieves that goal as effectively as any ambient album I’ve heard. It’s comprised of five short pieces and one longer one. While it’s drone music (and primarily guitar-based, as far as I can tell), each track has its own character, from the layers of muted noise on “Möbius Thought” to the Windy and Carl-esque caress of underlying chime on “Oak Horn” to the murky spaciness of “Torsion” and the primordial muddiness of “Onyx”.

The album’s real heart, however is, the eighteen-minute closer, “Oneiric Sun”. Making a longer drone piece that is interesting and really worth the investment of the listener’s time is not as easy as some might think. Stephens achieves this through a subtle change in dynamic, as the drone gradually increases in volume and drama, with layers of noise added until a very gradual denouement. The inherent calmness in this piece is as vast and comforting as the knowledge of one’s own insignificance can be. Well, I find that calming, anyway…

How really to summarize the effect of all this? Effectively produced drone music like this approximates in sound the very pulse of life in the air around us, suchness, the interconnected nature of all objects and all realities. It makes us feel closer to everything, like a meditator does after a good dose of zazen, all trivial thoughts put aside to just be. The gift of capturing this feeling in sound is a rare one.

Now, I’d best get on collecting the rest of this fellow’s releases!

Schlock on the rocks...