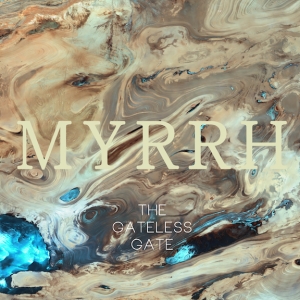 My intrepid recording project is back again with an EP, and this one has an interesting genesis. I’m a big fan of Australian neo-psych legends The Church. How big? This big. I’ve been listening to them since I was sixteen, and that’s a while ago. For most of that time they have been my “favourite” band. I’m too old to pick favourites now, but I still love their music and the wonderful lyrics of Steve Kilbey.

One day I was dozing and avoiding getting up. I slipped into a light slumber, wherein most of the details of this four-track EP seem to have been worked out, because when I woke up I knew almost exactly what I was going to do. Or at least a basic framework. Upon recording the cover of “Myrrh” from The Church’s classic 1986 LP Heyday, and an ominous little intro tune to lead into it, I was quite pleased indeed. Teri and I filled out the EP with two more tracks in our usual Kraut-ambient style. The mood inspiration for the three original tracks was lines from the lyrics of that very same song we had covered.

In a previous musical life, pre-instrumental ambient, I made several albums of “psych-folk”, a mystical, reverby and ethereal style of folk that came out of the misty sixties, and best known through the work, maybe, of Nick Drake, though he’s not necessarily the ideal example of the style (others are Pearls Before Swine, Vashti Bunyan). Anyway, I drew upon that style for this cover of “Myrrh”.

I think it all turned out rather well and is a fitting tribute from us to a band that has enriched our musical (and one might even say spiritual) lives so very much.

Note that this is licensed and cleared, and The Church makes royalties off this, especially if I should actually sell some downloads.

You can get this via everywhere that downloads are sold, including Bandcamp and iTunes: