Since the recent release of Yes’s dullest record to date, Heaven and Earth, I was inspired to make a shortlist of my favourite Yes albums in order of preference.

This is extremely hard, as every Yes album has something to love about it and many fans are still firmly in the “if Jon Anderson isn’t in it, then it’s not Yes” camp, which is a rather restrictive viewpoint given members have changed constantly … except for Chris Squire.

That being said, I still feel like a new Yes fan, even though I’ve been listening to them for 30 years. But in the Anderson spirit of accepting life and all within it, I flew to an undisclosed desert, drew the list in the sand of the ancient Zaaark, returned by camel to capture my thoughts and record two hours of fart sounds on a Hammond. Album forthcoming.

Although slightly bloated in places (like the previous Tales from Topographic Oceans), there are many excellent points in its favour. For instance, I love Steve Howe’s lightning guitar work on this, especially during the opening of “Gates of Delirium“. The ‘concrete-music’ elements (the ‘Battle’ section) send it into prog excess overdrive, but that’s kind of the fun of it. The band is in top form instrumentally, and I still get shivers during the ending of “Soon“.

“Sound Chaser” encapsulates everything I love about seventies Yes in one song: a killer rhythm section, complex melodies and harmonies, a song that would amaze the ears of a young drummer about what a band could do. SO. MANY. NOTES.

I had just discovered Yes’s catalogue in the early-mid eighties; if I recall, I went from 90125 straight into this, which was a mindblower. I also made a point of trying to collect all the solo albums that were released at this time (didn’t get them all but became a fan of Patrick Moraz).

There’s already so much written about this album — there is a reason it’s so beloved. Beautifully constructed with classically rich themes, it’s a full-band effort that has so many layers to appreciate. Something new to love each time I listen to it, although it is extremely serious in tone and lacks a bit of fun (even the tuning intro of “And You And I” feels too deliberate), which is the reason it’s not ranked higher. 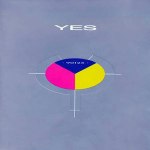 My introduction to the band in 1983; since videos were a brand new art form, I used to stay up late on Fridays just to watch Friday Night Videos. They played the full version of “Owner of A Lonely Heart” (a song that I had been hearing on radio and in stores lately), and I hadn’t been so disturbed by a video since Peter Gabriel’s “Shock the Monkey”. I loved the song and soon bought the full album and immersed myself in anything to be released around it.

I bought the 9012Live: The Solos EP, watched the 9012Live film on a tiny black-and-white TV set with fuzzy reception, bought the 12″ single for “Leave It” and the rare “12-inches on Tape” (hey, Warner Bros, I’m still waiting for a digital copy of the original “Owner” Red and Blue mix. Thanks.)

I didn’t know that I wasn’t supposed to like this new Rabin-infused Yes. I didn’t know how different the band’s sound had become, and how this Eye-on-the-Charts Yes were selling out. I picked up on their trademark knack for melody, a great rhythm section (“City of Love” is still one of the best two-note riffs ever) and I would thank Rabin for giving the band the shot in the arm it really needed (just like Trevor Horn did in 1980).

However, this would backfire later for Big Generator, as Yes were trying to please their own fanbase while keeping the newfound pop audience, resulting in a big mess that pleased nobody (although that didn’t stop me from buying the 12” dance remix of “Rhythm of Love”. Oi).

But 90125 has it all: light polyrhythms (“Changes”), fantastic vocal work (“Leave It)”, blazing instrumental work (“Cinema“), and as a pop record, nothing else sounded like it in 1983. Trevor Horn’s production literally sparkles, smacks and springs from the speakers. I’ve heard the multi-tracks for “Owner”, and broken down, each instrument is extremely economical and not at all special … but together it’s a work of genius.

Too easy a pick perhaps? Maybe so, but it’s the best of the Bruford-included albums for me (I am a drummer, after all). Fantastic classic Yessongs like “Roundabout“, “Long Distance Runaround”, along with little solo contributions by the members.

Normally, I would think this would take away from the overall group effort, but instead it lets in a welcomed sense of play, keeping the listening experience surprising and varied.

I am expecting the Steven Wilson 5.1 remix of this album very, very soon, and eagerly looking forward to it.

What!? An album WITHOUT Jon Anderson but with Trevor Horn and Geoff Downes?

What this album has, especially over the previous Tormato (worst cover!) is bite. This really rocks. It’s almost metal in parts (“Machine Messiah”), and Chris and Alan really gel on tracks like “Does it Really Happen?” and the previous “Tempus Fugit”.

For myself, Trevor handles the vocals extremely well, although the complex harmonies that Jon obviously had a big hand in are not as present, but neither are the cosmic lyrics (YMMV). And sure, Downes is no Wakeman, but this sounds like a band again … not just a collective of egos itching for a space to throw in an amazing lick. They groove in all the right places (Yes! Grooving!), and Alan’s drumming hasn’t sounded this powerful probably since Relayer.

It is the only Yes album that I can listen to throughout and not be tempted to skip anything. Even the sequence of the tracks is masterful: it kicks down the door at the start and doesn’t let up for the whole album, right into the glorious ending of “Tempus Fugit” (I know I keep mentioning it, but it’s probably my fave Yes song).

13 responses to “Going for the five: the top YES albums”